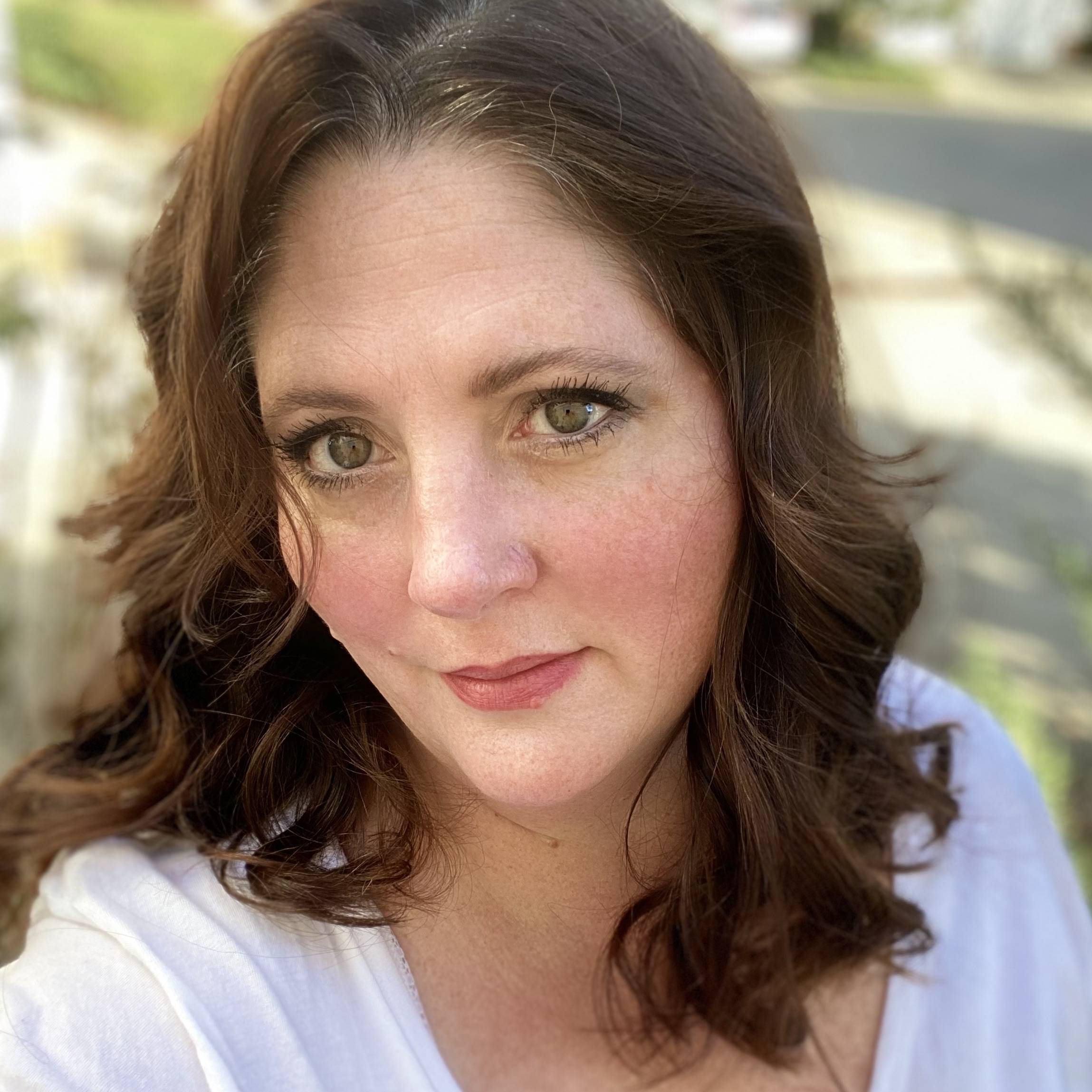 Why domestic violence spikes at christmas

The festive period is one of the most dangerous times for those facing domestic abuse. Elizabeth Blackney, a survivor of gang rape, is determined to help

In the UK last Christmas police received over 3,000 emergency calls about incidents of domestic violence. The festive period is known to be a peak time for ‘intimate partner’ abuse, due to a combination of spending more time at home, consuming more alcohol and a higher chance of family feuds. In other words, the ‘perfect’ storm. These same factors also applied to lockdown which saw calls to Refuge’s domestic abuse helplines rocket by a staggering 60% in the UK.

‘When you have a family with toxic behaviours in close quarters together for several days in a row, something awful is likely to happen,’ says Elizabeth Blackney, the Co-Founder of Women’s HQ, who has become an expert in violence against women, both through her work and her own personal experience. ‘We need to get services in place for people, from womb to tomb – i.e. to prevent the cycle from repeating itself when children grow up in a violent household and start to believe that kind of behaviour is normal.’

Elizabeth herself is an exceptional woman, who has managed to turn her own horrific experience into a powerful force for change. At 17, Elizabeth was abducted and gang raped by six young men in California. Her terrifying ordeal lasted six days and she feared for her life throughout. At one point, she heard her rapists discussing how to dispose of her body afterwards. But miraculously Elizabeth escaped and has since dedicated her life to helping other survivors of violence.

‘When this happened to me there was no sisterhood, there was no #MeToo movement,’ she recalls bitterly. ‘I felt like the feminist movement couldn’t have cared less about me. Back then, in the US if you got raped, it was mostly either by your boss or a creepy guy on your college campus. That wasn’t my experience at all, so the stigma for me was really, really high. Thank God for my parents and my grandmother, they never stigmatised me or judged me. I met the love of my life at 21 and thankfully he never judged me either.’

Elizabeth wants to make sure no other woman ever feels as alone as she did back then. Full of warmth, energy and determination, she is an unstoppable force for good, with an infectious laugh that peppers our conversation even in the most difficult moments.

In 2020, Elizabeth co-founded Women’s HQ, an incredible charity in the US, which is led by survivors like her. It mainly serves Black and Brown women living in shelters in Washington DC and Virginia. So far, Elizabeth and her Co-Founder, CEO Kimberly Harris have worked with 11 different shelters, but they have big plans to roll out their work across the US, helping thousands more women. Although men too can suffer domestic violence of course, Elizabeth estimates 95% of the people needing their help are women. Kimberly, Elizabeth’s inspiring Co-Founder, spent three years living in a domestic violence shelter herself, so knows all too well the vital importance of having a safe place to sleep at night. 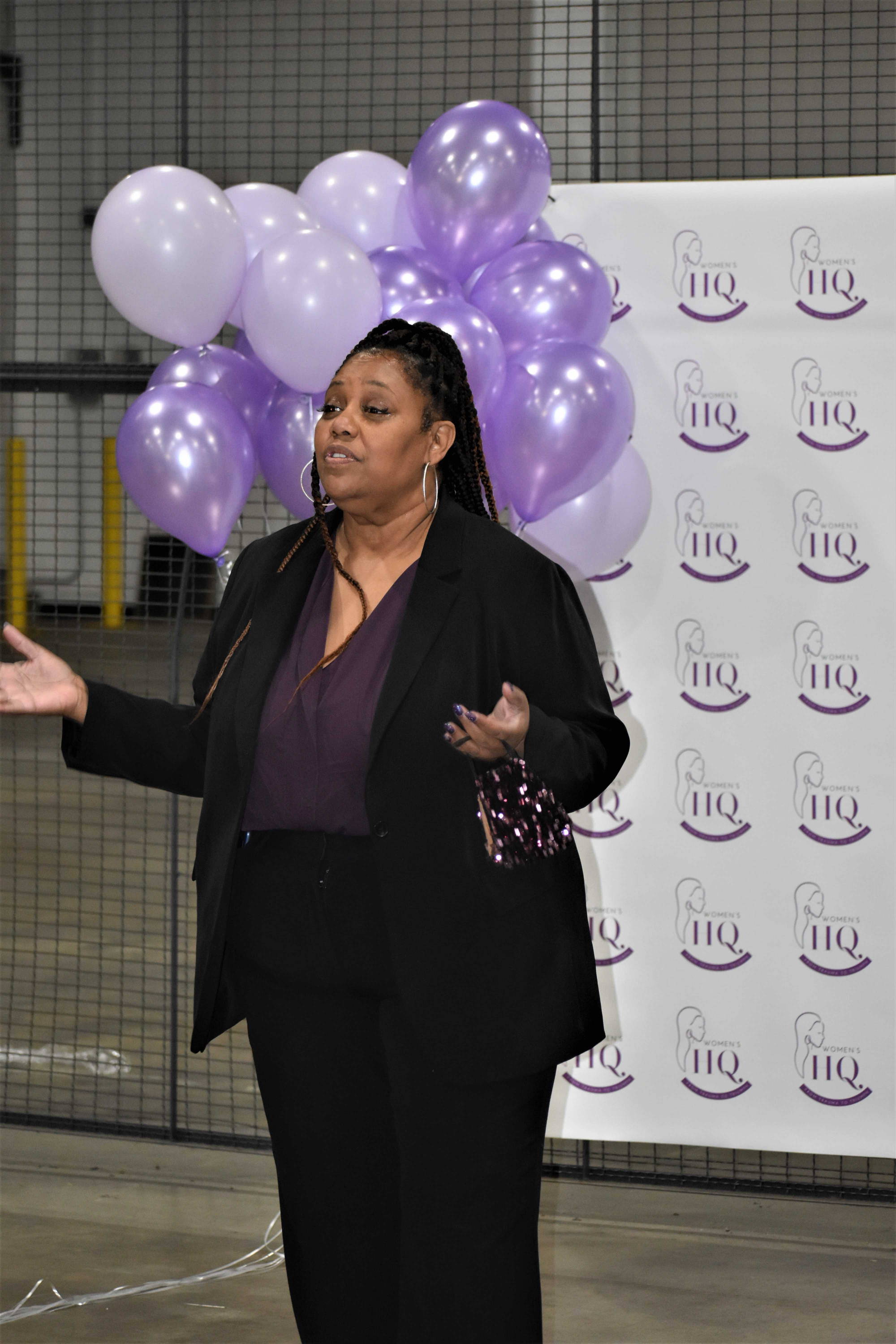 The point at which someone decides to leave their abusive partner is known to be the most dangerous, the time when a perpetrator is most likely to commit homicide, according to leading charity Refuge. In fact, two women a week are killed by a current or former partner in England and Wales alone. Elizabeth and her team are determined to empower women so they have the choice to escape.

‘We have to make it possible for people to leave – and to leave with dignity,’ says Elizabeth. Many women flee in the middle of the night, with their children and no possessions. Through partnering with over 20 different brands, Women’s HQ provides ‘Survivor Comfort Kits’, a package containing a combination of personal beauty and hygiene items, blankets, journals and programme materials, which they receive in one of the city’s many refuges on arrival, often in the middle of the night. ‘The volunteers have told us that most of all, it means the world to these women just to know someone cares about them,’ adds Elizabeth.

Women’s HQ is in the process of distributing over 10,000 of these kits, which are worth around $450 each (around £340) and contain luxury brands such as UGG blankets, beauty products from Estée Lauder and items of jewellery by local designer Sequin NYC. Generous gifts like these mean when women start to rebuild their lives, attend job interviews and so on, they have jewellery to wear to help boost their confidence.

‘When survivors flee they often have to leave everything behind in an emergency situation and that means you don’t even have things like your favourite lipstick,’ says Elizabeth. ‘The problem with systemic violence, oppression and control is that it’s the little things in our life that we are forced to leave behind. Our Survivor Comfort Kits aim to provide much-needed goods.’ 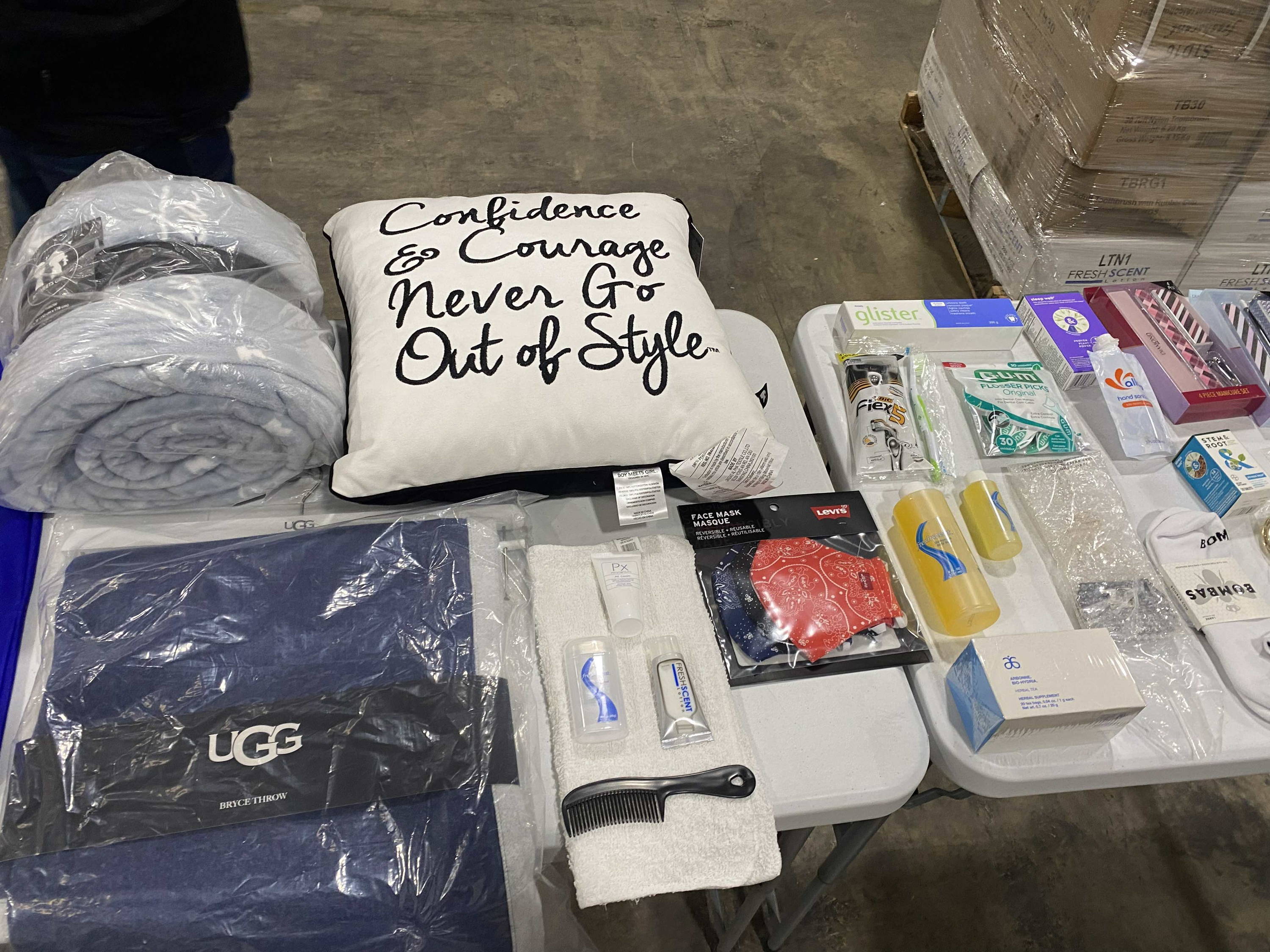 Women’s HQ has teamed up with two other organisations in the US, Good360 and Capital Area Food Bank. Good360 donated $500,000 (around £378,000) worth of items to meet the gap for survivors living in shelters and Capital Area Food Bank donated hundreds of Food Boxes for survivors living in temporary accommodation with self-catering facilities. Elizabeth works 24/7, approaching multiple leading brands to provide more of the items that will bring comfort to people.

‘Every day more women are rotating into the shelters and especially at this time of year, it’s such a crunch point,’ explains Elizabeth. ‘One of the shelters we donated our Comfort Kits to houses 400 women and their families, so that could be over 700-1000 people at any given time. We’ll either arrange for volunteers to pick up the Comfort Kits or Food Boxes or we’ll arrange to deliver them. We have to be very careful security-wise to protect the location of these women of course.’ 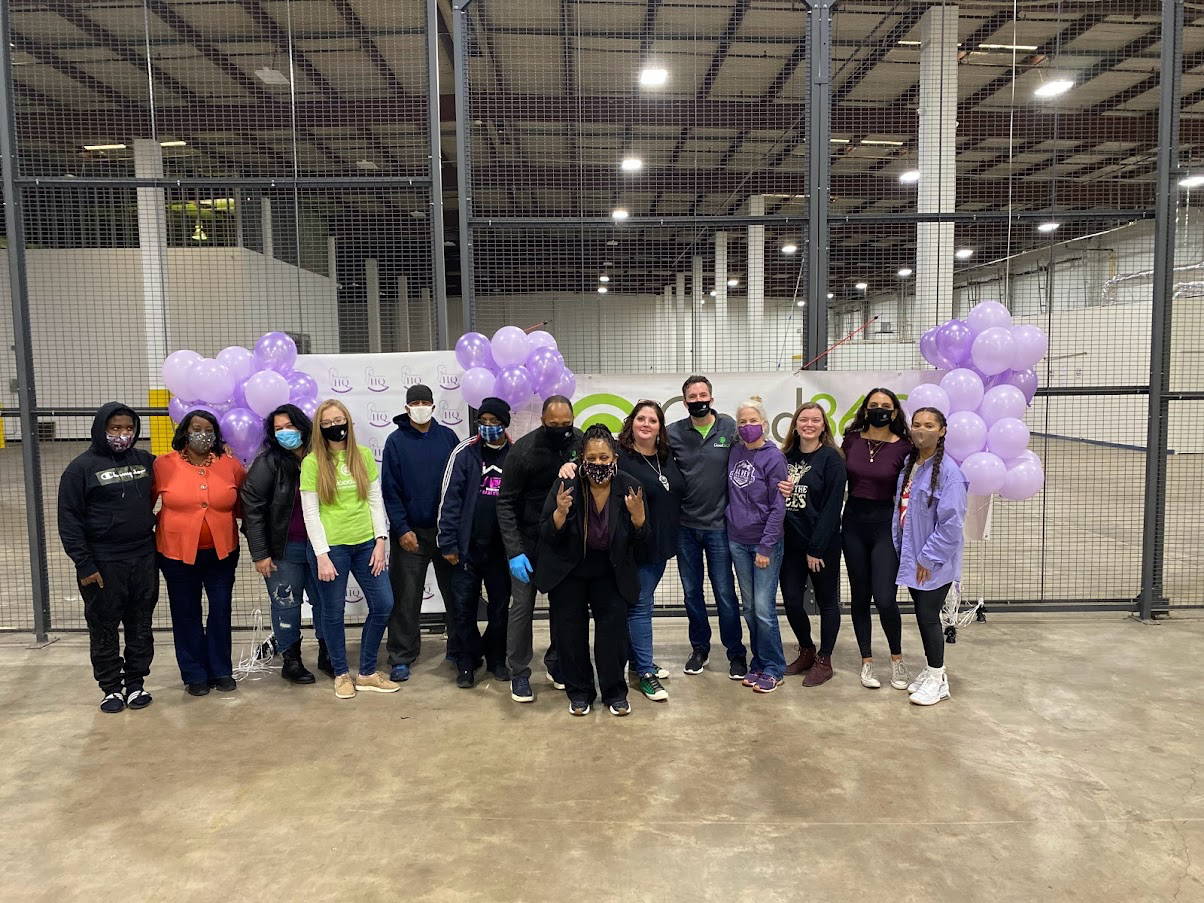 It has taken Elizabeth years of therapy to get to the point where she has been able to process her own experience. She says her friendships with other survivors of gang rape, mainly those who’ve experienced conflict-related gang rape have been vital in her journey to recovery.

‘The people who really saved my soul are the women I met from Sudan, Congo and Rwanda, who were victims of conflict-related sexual violence,’ says Elizabeth, her voice cracking with emotion. ‘One woman in particular Hawa Salih really changed my life. She won the 2012 International Woman of Courage Award. I met her just after she fled Darfur at the height of the genocide in 2004 and she understood everything about my experience, because she herself had been kidnapped and gang raped by a corrupt police force in Sudan. She’s an amazing person.’

The details of Elizabeth’s own ordeal are deeply disturbing. She describes being recruited by a young woman she considered a friend, who tricked her into coming back to a property where the rape took place. Elizabeth says the ‘ring-leader’ of the pack was the ‘most evil and violent’ of the six men, who were all in their late teens and early twenties. All were white except for one Black man, who clearly did not want to take part in the despicable acts of violence and degradation.

‘He kept saying to the others, “Man, we don’t need to do this. You made your point, we’re good” and was trying to talk them all out of it, but the leader just told him, “You do it, or you’re next,”’ says Elizabeth. ‘It was pure evil. I witnessed systemic racism, watching a young white man tell a young Black man, “You do it or you’re next.” He cried all the way through raping me and I still remember his tears falling onto my face. It was horrible.’

Elizabeth’s escape was nothing short of a miracle. The gang moved locations halfway through her six-day ordeal and she recognised the street they were on. Once inside, the gang briefly left one man to guard her, who was high on drugs.

‘I somehow convinced him he should take all the rest of the drugs, saying he deserved it, then when he was totally out of it, I begged him to let me use the toilet, so that I’d no longer be lying in my own excrement,’ says Elizabeth. ‘He agreed to let me go and I was able to call my parents from the bathroom and describe exactly where I was. Within 10 minutes, my father ran into the flat where I was being held, while my mother kept look-out on the staircase. We fled in their car.’

Of course, her experience affected her deeply, but Elizabeth is determined to show other survivors that life goes on and happiness can still be yours. ‘I was very lucky to have a beautiful life ahead of me. I went on to meet the love of my life at 21, we got married when I was 22 and had my daughter Bella when I was 23. I was then widowed at 25 when my husband died in the line of duty, which was extremely difficult, but my survivor experience forced me to become resilient and develop my own coping mechanisms. It forced me to know myself and confront the very essence of who I am.’ 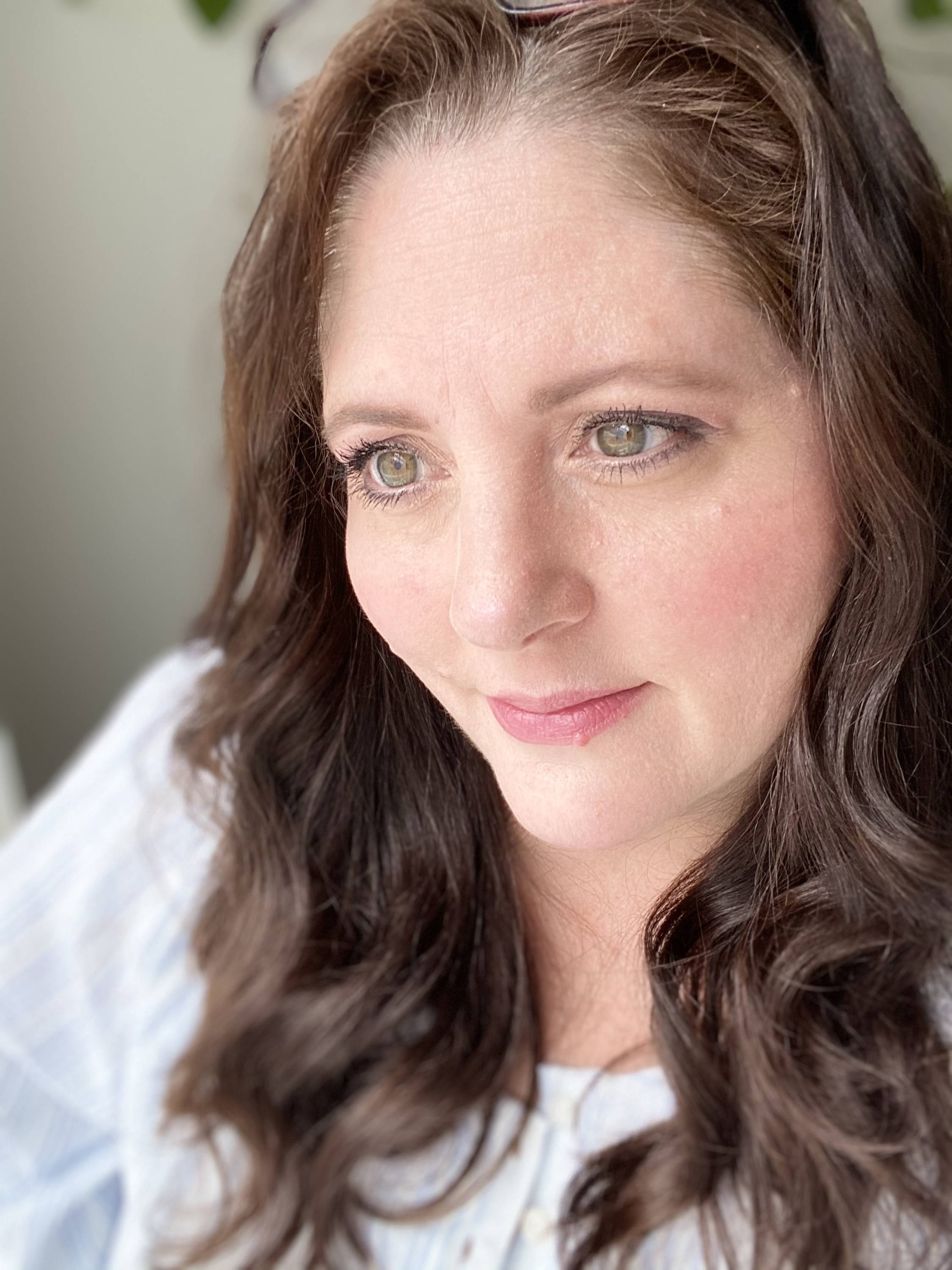 Elizabeth has an incredible inner strength, which she says partly comes from knowing she was so very loved by her late husband, who helped her to heal. ‘He saw me as a whole person, he saw all my insecurities, all of my flaws and he still loved me and found me to be “enough”. I felt like, “Oh someone can love me, so I must not be the things they said when they were raping me.”’

She is now on a mission to bring comfort and reassurance to the thousands of other women who’ve been brutalised and are struggling to rebuild their lives. Through her work with Women’s HQ, which also offers access to career enhancement and coaching programmes, as well as art and creative therapies, she too hopes to show other survivors that they are ‘enough’.

If you or someone you know has been affected by sexual violence, contact Rape Crisis for support.

Through buying a Christmas parcel for a woman or child escaping domestic abuse via the UK charity Refuge, you can be there for women and children facing domestic violence this Christmas. Your kindness can help give families a safe, hopeful Christmas to remember.

If you’d like to donate to Women’s HQ, please see the various ways you can help here.

Are 3D Printed Houses The Future?