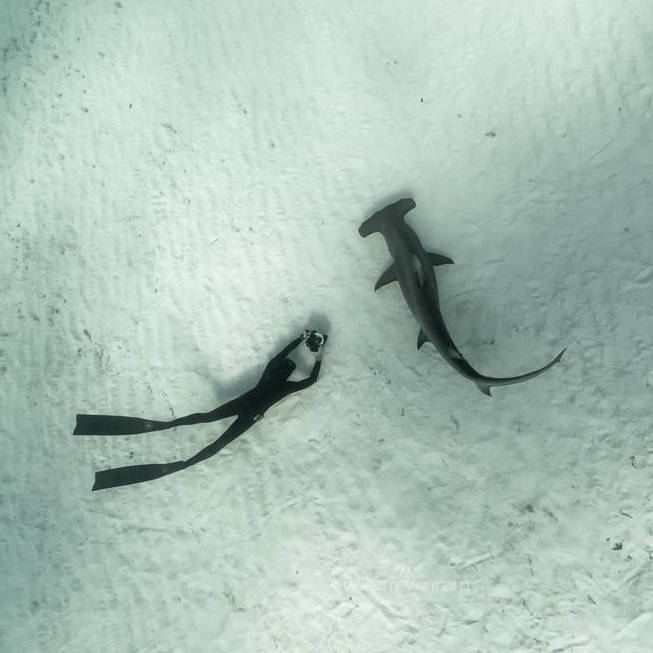 Watching a great hammerhead go by

We meet the ocean explorer, world record freediver and conservationist

William Winram founded his non-profit organisation The Watermen Project in 2012 with the aim of protecting and studying sharks and the sea. Here, he tells us how he’s seen the rise of plastic pollution in the last twenty years, about his special relationship with sharks, and why he’s joining #TOGETHERBAND.

How did you become an ocean explorer? Were you always an adventurer?

I think our very nature is that we’re explorers; we explore our environment. That’s how we learn. Part of that is stimulated by where you grow up, whether the environment is rural or urban, and it also kind of depends on your parents. I grew up in really small towns in Canada, areas where we had bears, there were deer on the lawn and mountain lions roaming around. My father’s passion was diving, it wasn’t how he earned his living but that was his passion, so he was up for sharing that with my brother and I. My mother dove as well. We’d go exploring on paddle boards, freediving, spear fishing.

I excelled more in the water than I did on land. Part of it was because I got picked on a significant amount when I was a kid; going into the sea was where nobody was going to bother me or pick on me.

What is it that you love so much about being under water?

There’s a simplicity to it. Everybody has all of these life stresses in day-to-day life - your career, paying your mortgage, all of these different bills - you’ve got all of these low level unending stresses, so in a sense it’s a reprieve. But it’s also kind of an alien environment and you never know what you’re going to see. 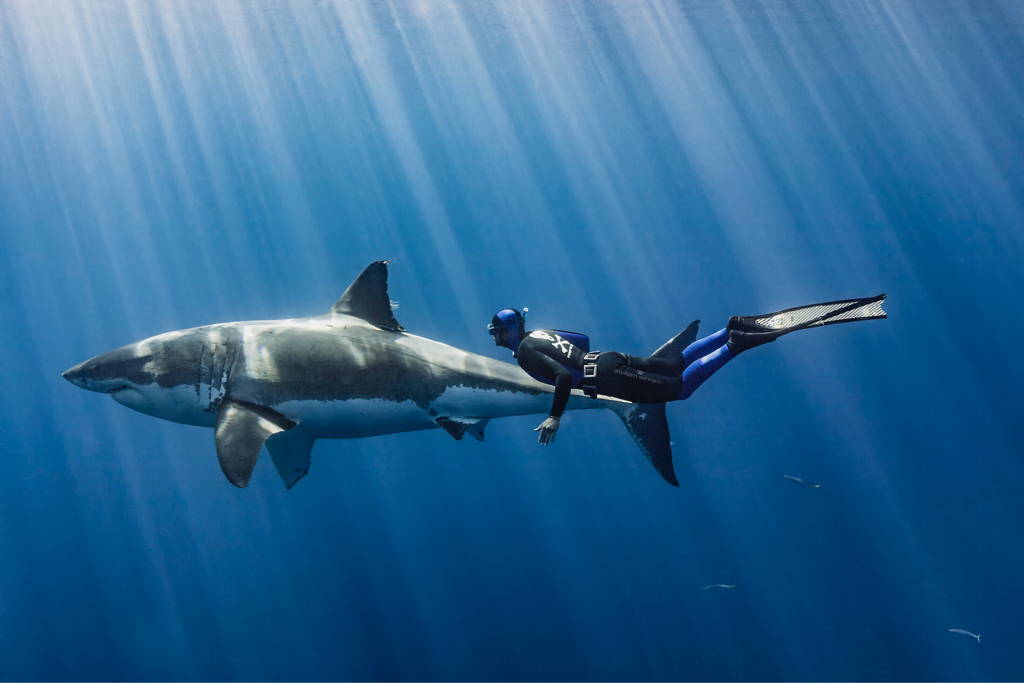 Freediving side by side with a great white shark © William Winram

Why is free diving so unique?

When I was taught to dive my father taught us to freedive first. That was how everyone was taught how to scuba dive at the time - you learnt to have a certain amount of ease and aquaticity and comfort in the water before you would don any breathing apparatus. I do scuba dive and I use it from time to time but a lot of the places we work in you don’t have access to scuba gear. And blowing bubbles for a lot of marine mammals is a sign of aggression. The equipment is noisy. One of the first times I was working with scientists I was tagging hammerhead sharks and it’s extremely difficult to get near them when you’re in scuba because of the bubbles and the noise it creates - versus swimming in a school of a thousand of these animals on a breath hold.

You have an amazing relationship with sharks - tell us how that came about.

They’re absolutely my favourite sea creature. They’re misunderstood much like everybody on our planet. Does anybody feel like they’re understood?

In my early twenties I was doing something quite stupid that my father told me never to do - but I was quite young and stupid so it was perfectly logical! Nobody wanted to go spearfishing with me so I went spearfishing alone. I was probably a kilometer from shore and I’d just caught a fish and speared it with my knife when I felt a presence behind me and it was a 4.5 metre female tiger shark. It was the first shark I ever saw in the water. In the entire encounter of swimming back to shore and her following next to me I thought that this thing was going to kill me, and that was based on the ignorance of everything I’d read which said “known man eater”, “extremely dangerous”.

But what she presented was a shy, curious creature. Never once did she get aggressive towards me. In fact, towards the end when I moved towards her she moved away, and when I moved away she followed me always at a distance, which I know now after thirty years is their safety distance. That started this desire when I got home. I was in the library, I was ordering books, I was reading, and I was looking to see if anybody else had had this type of encounter with a predator. I didn’t see it anywhere so I was like ‘what’s the truth?’ 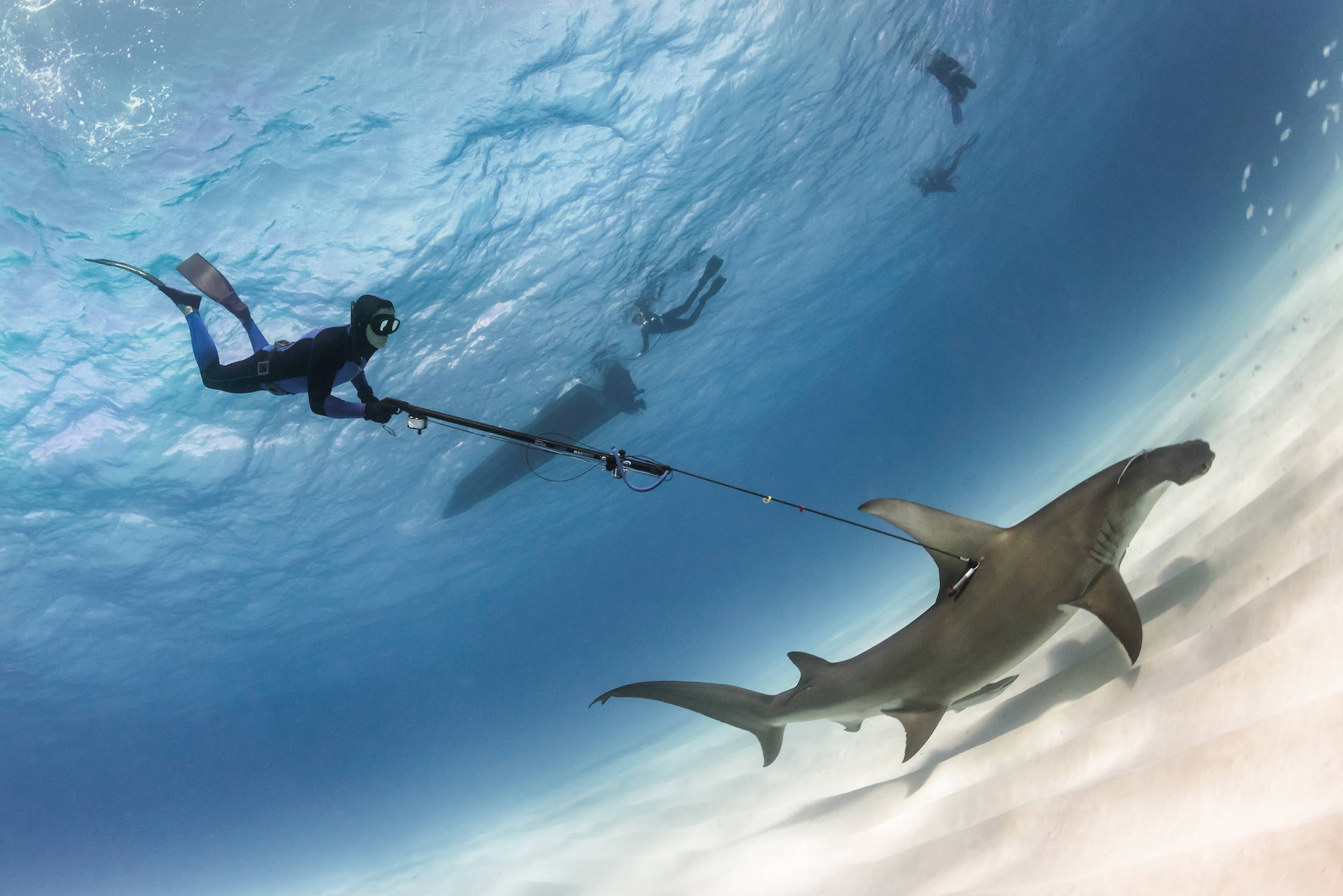 Where in the world have you dived? Is there anywhere you haven't been?

There are places I still want to go. I was just in Greenland for the first time and we had no luck with animals. Global warming is alive and well. I spoke to a lot of locals and they said the ice melted early this year. There were mosquitos everywhere - they said they don’t get mosquitos until the end of July and we were there June 15th. We went across to Disko Island were you would normally see whales. There were no whales. We went as far north as the ice sheet and engaged some local hunters to look for narwhal and beluga whales, which we had no luck with whatsoever. Everywhere we went, everybody said that the climate used to be predictable and it’s not anymore. The ice is thawing sooner and sooner every year.

How have you seen changes when you’ve been diving elsewhere in the world?

There’s a timeline for me. It’s not BC, AD. It’s BP, AP - before plastic, after plastic. I can remember diving and never seeing plastic of any form, except if there was a massive storm when you might get fishing boat buoys and that sort of thing. This is only 15-20 years ago. My friend has a house in Mexico where I could literally guarantee you that I could catch whatever fish you wanted to eat. And then ten years later there’s nothing.

Do you think that if everyone could see what you see as you see it they’d be more compelled to protect it? Is that why you tell stories through The Watermen Project?

One problem for the oceans is that they’re not visible. Even in coastal communities, not even 10% of the people will ever go in and go under and see what’s there. So we had tremendous results with virtual reality. We have a film of the manta (ray) mating courtship dance and I was the one lucky enough to be in the water at the time to film it. You’ve got a 14 kilo camera rig on the end of a 2m pole that you have to keep absolutely stable, so I was fixated on keeping this thing steady and following the mantas. It was almost a half an hour of this and I was focused to the point where I didn’t actually take in the experience. Then I got back to Europe and the guys had done a rough edit and I put on the headset and 50 seconds into it I said ‘guys throw water on me!’ It just makes it that much more real, and it was just like being back there. So yes, in a sense, the reason that I started taking photos and making films was to try and engage people. We want to immerse people in this ecosystem, we want to immerse them in seeing what we see. And that includes plastic. And we want to show them this issue, but we don’t want to devastate them. We want to give them hope. 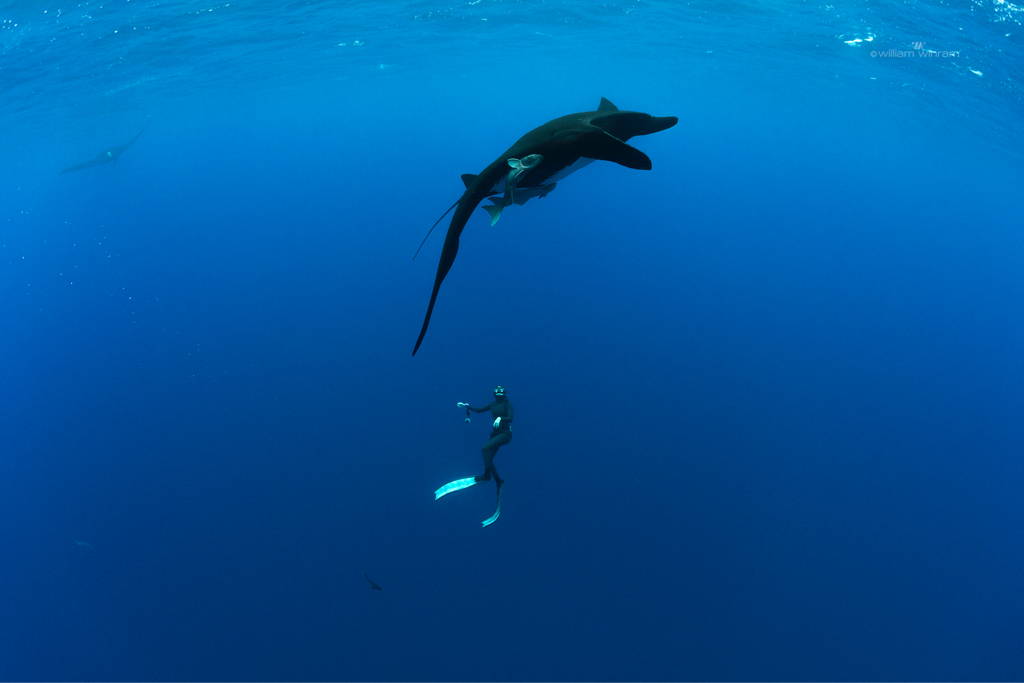 If we’re all working together we can help each other to figure stuff out. This is why I like #TOGETHERBAND. I like the term. I like the branding. We will not succeed if we don’t work together. No amount of NGOs, government and PR work is going to change this if the average person - us - doesn’t get involved. I am connected to people all over the world via social media and the internet which didn’t exist when I was growing up. We are now truly a global community. It’s about recognising that we have differences of language and of culture and we can agree to disagree but we need to work together to solve these problems.

Are you hopeful for the future?

I’m optimistic about human beings. My ability to be present in the moment and pay 100% attention is one of the reasons why I can get safely in the water with great white sharks. Part of the problem that we have, I believe, is at an individual level. The more present people are in the moment - and this is a problem because all of our technology is pulling us out of the present moment - the more mindful we are, the less stressed we are. And the less stressed we are, the more relaxed we are, the better our decision making capabilities are, and we can see things more clearly, we can think more clearly. 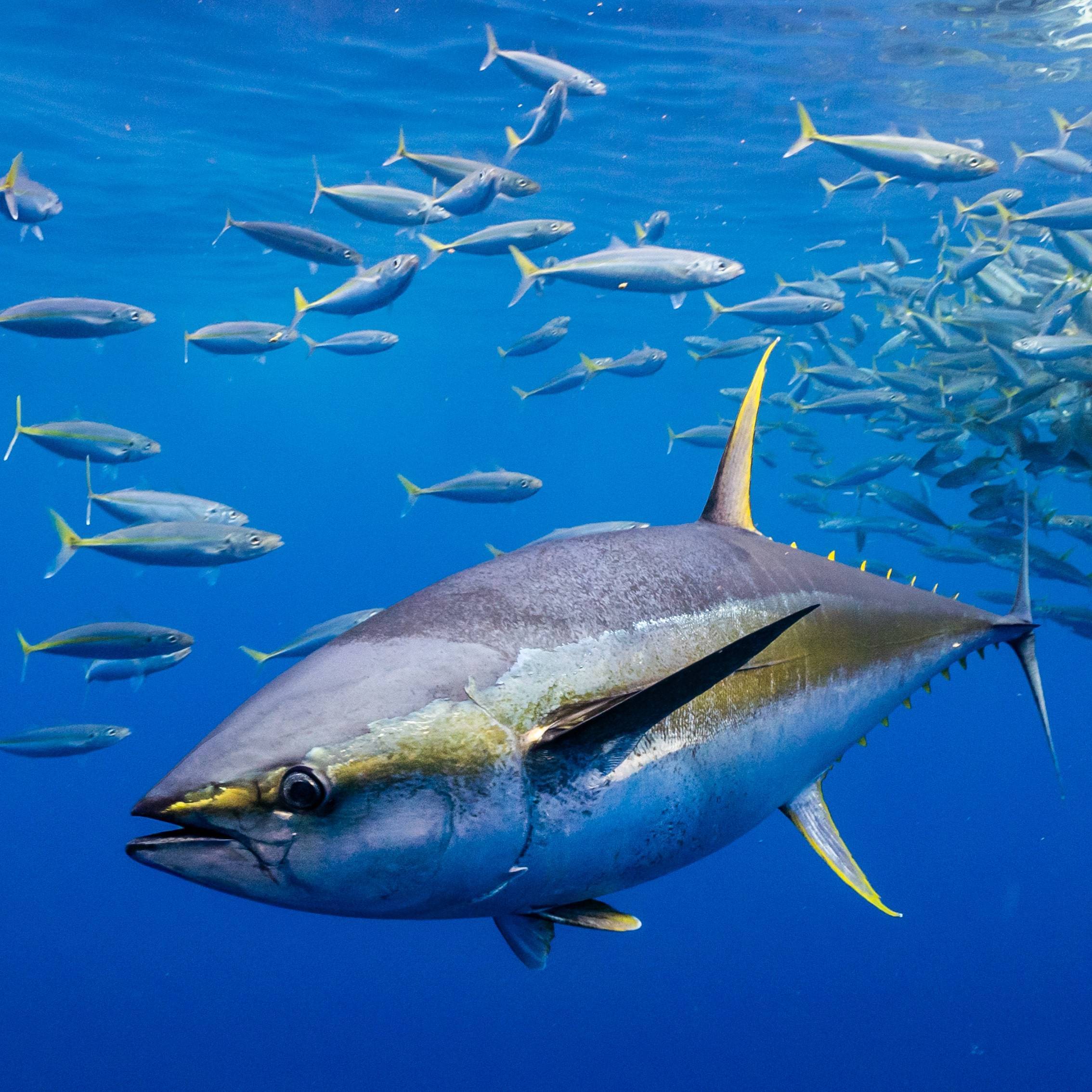 Should We Eat Fish? We Asked A Marine Biologist. 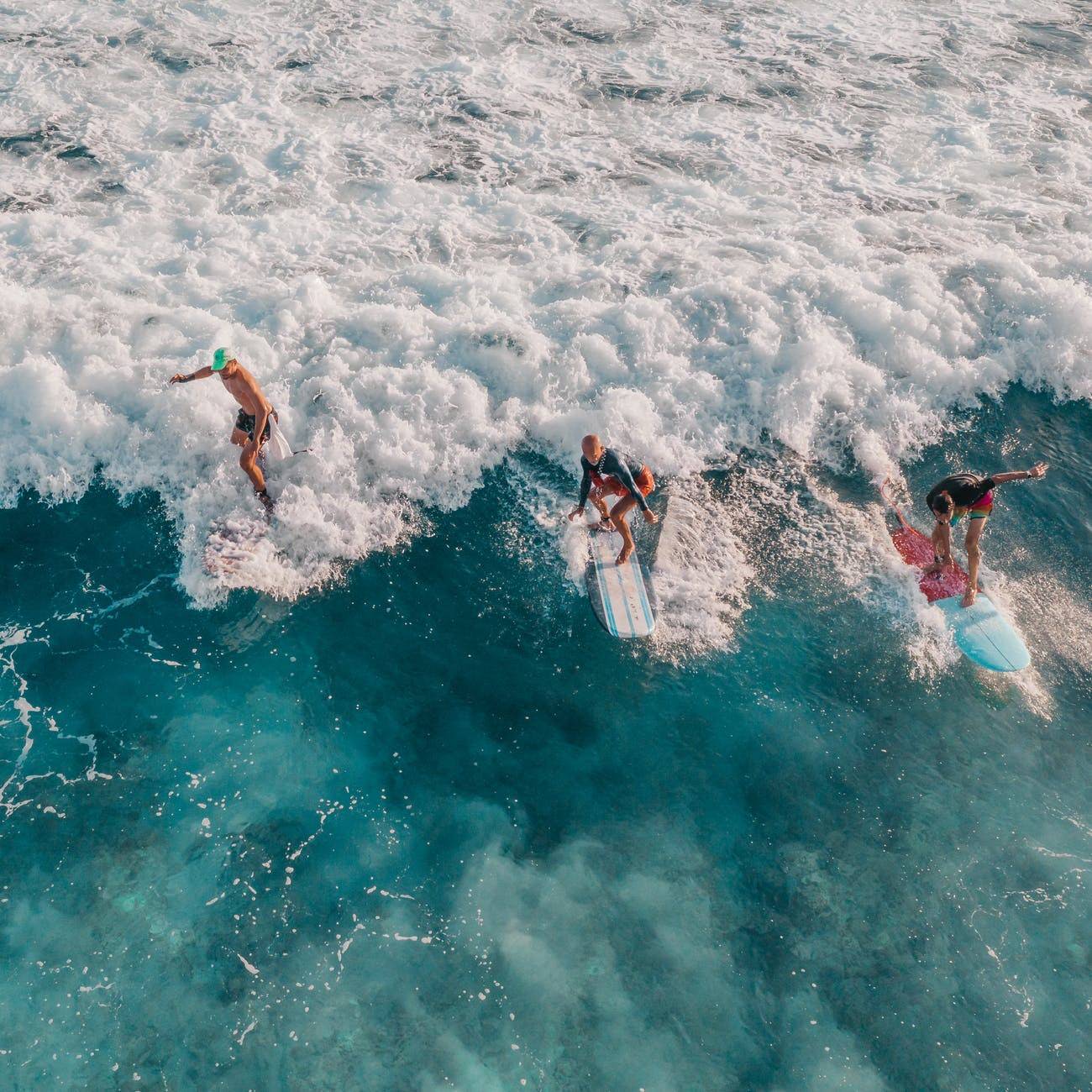 Nature Relatedness: How It Can Help You... And The Planet