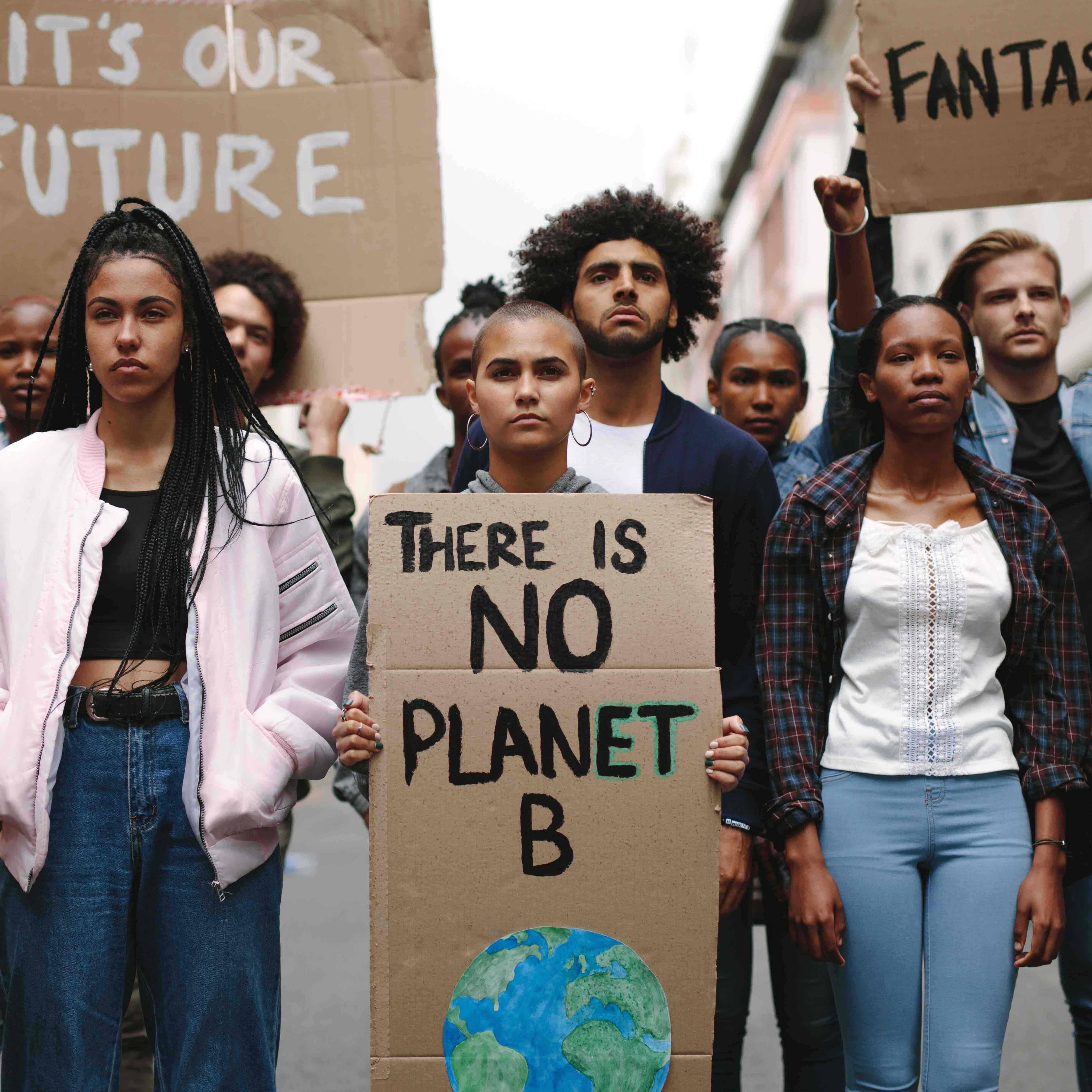 The A-Z Of Youth Climate Activism

Ever heard of ‘The Girl Who Silenced The World for 5 Minutes’? If you’re a Gen Zer, as today’s youth activists are, the chances are you haven’t. But before Greta, over 10 years before she was even born, Severn Cullis-Suzuki was paving the way for the school climate activism we see today.

Aged 9, this third generation Japanese Canadian founded the Environmental Children’s Organization at her school and in 1992, when Severn was just 12, the group raised enough money for her and three friends to attend the Earth Summit in Rio De Janeiro. It was here that she earned her nickname following a speech to delegates outlining environmental concerns from a youth perspective. ‘I am afraid to go out in the sun now because of the hole in our ozone,’ she told them. ‘I am afraid to breathe the air because I don’t know what chemicals in it.’

Nearly 30 years later, and sadly with more concerns about the climate emergency than ever, youth climate activists are making the headlines again, but this time, they’re all over the world and thankfully, there are more of them than we could list in this alphabet alone. Here are just some of the young people we should all be listening to.

A is for…Anuna De Wever

A co-founder of Belgium’s School Strike for Climate movement, Anuna was one of 35 activists who sailed across the Atlantic in 2019 to attend the UN Climate Change Conference and visit the Amazon. She said of the people she met there ‘You can really see how climate change is already affecting millions of people’s lives: the whole forest is drying out and the rivers are completely polluted.’

With achievements including being an ambassador for the Born Free Foundation, making a documentary with Dame Jane Goodall and writing for British Vogue already under her belt, this teenager, who promotes positive actions via her blog and social media platforms, is destined for big things.

C is for…Caitlin and Ella McEwan

After studying the environment at school, these sisters (who were aged just eight and 10 at the time) petitioned McDonald's and Burger King in a plea to have them scrap their free plastic toys in favour of sustainable alternatives. Both brands have promised to do exactly that.

This 15-year-old has been striking with Fridays for Future since January 2019. Being from northern Italy, he is keen to amplify local issues. ‘The disappearance of the Alps glaciers is not too far,’ David said in a recent interview. ‘The reduction of glaciers expansion brings with it a major water crisis to northern Italy, as our main (and only) source of drinkable water are in fact the glaciers.’

In 2019, aged just 11, Elsie founded the junior branch of Extinction Rebellion - XR Kids. She had previously lobbied oil companies in London, and managed to secure a meeting with Shell’s UK chairwoman to discuss what the company is doing to address its contribution to climate change.

Jerome is founder and co-editor in chief of The Climate Reporter - a youth-led international news outlet reporting on the youth climate movement and environmental issues - and he’s still only 18. His latest venture is One Million Of Us, which empowers young people to be active in their own democracies.

The poster girl for the youth climate movement, Greta has now had a documentary film made about her journey from Swedish school girl to global climate activist, which premiered at the Venice Film Festival in September 2020.

At just 12 years-old, Haven used the Fridays for Future strikes to sit outside government buildings in Denver, Colorado, in spite of sometimes hostile reactions from local adults, as well as, thankfully encouragement. ‘The reason why we are “climate striking” is to try and get the attention of the adults, because we can’t vote — but we can influence senators.’ she said.

She’s the co-founder of the Climate Strike movement in the US, and the daughter of congresswoman Ilhan Omar; still only 17, Isra has recently made Fortune’s 40 under 40 in Government and Politics list.

The fact that his native country of India is the third largest producer of greenhouse gases, while also being one of the countries most vulnerable to climate change, is not lost on this Kerelan activist. ‘We can no longer pretend nothing is happening,’ John Paul has said.

The daughter of an environmental scientist, Kallan is a national coordinator for Fridays for Future in the US. She was the spokesperson for the group when they refused the UN’s Champions of the Earth prize in 2019. ‘Awards are for celebrating achievements,’ she said on the podium as she handed the trophy back, ‘but the achievement we seek has not occurred.’

Dubbed ‘The Environmentalist-Footballer’, aged 14 Lesein combined his love of sport and passion for the environment by planting a tree for every goal he scored after learning that his home country of Kenya was losing the equivalent of 164 football pitches of forest every day. This seed of an idea grew, as his school adopted it and began planting a tree for every team member in its football, rugby and basketball teams. Trees For Goals has now planted over 1,000 trees.

She’s still studying medicine at university, but somehow Mikaela finds the time to be one of the UK’s most inspiring climate and social justice activists, as well as co-host of The Yikes Podcast, a writer, and the curator of her hugely popular Instagram platform which she uses to speak about all of these issues to her 85k+ followers.

Our Goal 13 ambassador is a core organiser at the UK Student Climate Network. ‘The climate crisis is this urgent terrifying notion,’ Noga tells Brooklyn Beckham in our exclusive film. ‘It's this concept of the world around us falling apart and that we're entering a phase of total devastation. That's a terrifying thing to hear.’

This Irish teenager has quit school in order to concentrate on full-time climate campaigning with her friend Greta Thunberg. ‘I decided that campaigning for action on climate change was what I needed to be doing,’ she told a local newspaper. ‘I switched to homeschooling. My parents were really supportive.’

‘I want to see a world that has clean oceans, and that doesn’t have plastic pollution anywhere, and people live in harmony with nature.’ Wise words from this 11 year-old who is part of Fridays for Future in the Netherlands. According to the UN, we have until 2030 to cut emissions in half and curb the effects of global warming, by which point Lilly will be just 22 years old.

Q is for… Queen of the birds

Mya-Rose Craig is more than your average birdwatcher - as well as being the youngest person to see half of the worlds’ birds, this 18 year-old Bristolian is an environmentalist and race campaigner. Mya-Rose is currently with Greenpeace scientists on a ship travelling through the arctic to help push through the UN’s Global Oceans Treaty, which aims to protect 30% of the world’s seas by 2030.

The co-founders of Jóvenes por el Clima Argentina - Youth Climate for Argentina - Bruno and Eyal organised a climate protest in front of the national congress in Buenos Aires.

It was August 2018 when a 15 year-old Greta Thunberg and a band of young activists had the bright idea to sit in front of the Swedish parliament every school day for three weeks. Their protest sparked the imagination of a whole generation, and Fridays For Future strikes now take place in 7,500 cities all over the world.

This intersectional climate activist fights for fair representation and a voice for all. Tori appeared in Stella McCartney’s AW2019 campaign and uses her Instagram platform to speak candidly about mental health issues.

U is for…UK Youth Parliament

17 year-old Athian Akec is a UK Youth MP for London’s Camden borough. In addition to being a passionate speaker on climate change, he campaigns on knife crime, racism, inequality and Brexit.

Vic, who is from White Plains, a part of New York that is threatened by rising sea levels and that was hit hard during Hurricane Sandy in 2012, is one of 21 young people suing the US federal government for its part in causing the climate crisis.

W is for… Water Warrior

Autumn Peltier is a clean water advocate, campaigning for the rights of First Nation communities who can’t drink their water due to pollution, particularly in the Great Lakes area. Aged just 15, she has already met with the prime minister of Canada, Justin Trudeau, to discuss the issue, and has won an armful of awards.

‘Earth is our home. It gives you air, water and shelter. Everything we need. All it asks is that we protect it.’ Xiye is a member of the indigenous Mexican Otomi-Toltec nation. She is one of the main organisers of New York’s Fridays for Future, on the committee of the People’s Climate Movement, a coordinator for the Re-Earth Initiative and a member of Extinction Rebellion. And she’s only just turned 18.

Y is for.. Youth Climate Summit

The United Nations’ Youth Climate Summit took place on September 21st 2019 in New York. It was a chance for young climate activists to present their ideas and solutions to the UN and give them an unprecedented opportunity to engage with some of the most powerful decision makers in the world.

Founded by Jamie Margolin, Nadia Nazar, Madelaine Tew, and Zanagee Artis, Zero Hour - a US-based youth climate activist group - was created in 2017 out of frustration that young people’s voices are so often ignored in the climate conversation, even though it’s their lives that will be most affected.

It is 'The Lungs Of The Planet' - This Is Why